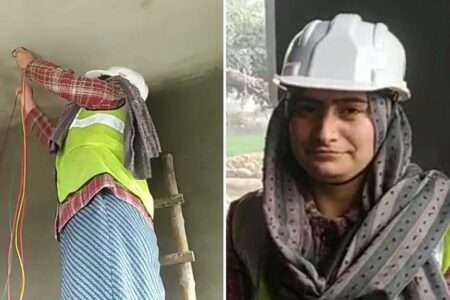 Miss Shabnam an engineer from Doda has become a first woman Electrician of Jammu and regions sensation overnight.

Shabnam is being reported providing door-to-door electrical services to locals in Jammu.

“We should pursue that field in which we have interest, it should not be imposed. Our parents should also be supportive of us guaranteed they feel safe about our work place”, Shabnam told media.

“If I do this work it will set an example for the women I thought”, she said.

“I have done Masters in Techology (MTech). I have a opinion that engineers are innovators and they should think out of the box. Earlier, I was preparing for civil services but after some months I changed my mind and pondered to do something in my field”, Aquib Rashid Khan Shabnam’s brother said.

He added that he had an idea to form his own team of people for this work and he formed one along with his sister, which is also working in Doda.

“Women must be encouraged and should not shy away from anything. They should come forward to prove their mettle”, Shabnam said.

She further said that women should not pay heed to people’s opinions and must never look back.

“I can repair all the electrical appliances such as, fridge, washing machine, water heater”, she said.

“Earlier, I was afraid to hold live wires, but now I’m used to perils of this work”, Shabnam added.

“The local women will also be at ease if they hire my sister for work in their homes”, Aquib said.

Aquib further said that they are soon going to open their office near B.N College at Sunjwan, Jammu.

“We are also going to launch our website soon and anyone can contact us through social media to avail our services”, he said. (KNH) reports