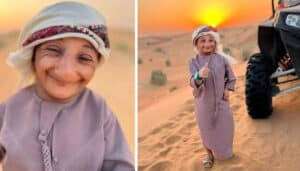 Most Popular Youtuber Died at the Age of 27,

It is very sad to share that the most popular Saudi Youtuber Aziz Al Ahmed aka Dwarf died on Thursday 19 January 2023. He was a star of social media and now his death is shocking news for his loved ones. There are so many people expressing their sorrows for his death and the news of his death is spreading like fire on the internet where various users of social media pages share their responses on his death.

He was also known by his nickname Al Qazm which means dwarf in Arabic and now he passed away at the age of 27 years. He was suffering from problems with growth as well as a genetic disease and a hormonal disorder from his birth. His family tried to make his health condition good but nothing happened and he faced too much in this treatment.

Aziz used to upload funny videos on YouTube and had millions of followers, Aziz was married and has a son.

Recently, a video of him from the hospital went viral in which he was lying on the bed, a woman was asking him what do you want to say to your fans, to which Aziz replied that ‘I want to say to all of them. I love them so much.’

His number of followers on Tik Tok was 9.4 million while on YouTube he had 8.87 thousand subscribers.

Read Aslo  Saudi Arabia to launch ‘Made in Makkah’ and ‘Made in Madinah’ products: Minister