Hajj Numbers Will Be Without Restrictions: Hajj Minister

JEDDAH: The Minister of Hajj and Umrah Dr. Tawfiq Rabiah announced during the opening day of Hajj Expo 2023 has said: “the Number of Hajj pilgrims in 1444H will return to how it was before the Coronavirus pandemic without age restrictions

With no restrictions this year, the number of Hajj pilgrims in Saudi Arabia in the upcoming season will be similar to the pre-pandemic levels, Reuters reported citing state media.

Saudi Arabia will not impose any restrictions, including age limits, on Hajj pilgrims in 2023, according to the Hajj minister.

The number of pilgrims will return to what it was before the pandemic, without any age limit,” Tawfiq al-Rabiah, minister of Hajj and Umrah, announced during the opening of Hajj Expo 2023 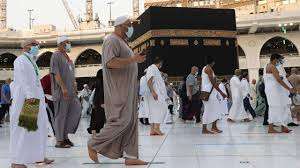 The ministry of Hajj and Umrah, however, had earlier said that priority for registration this year will be given to those who have not made the pilgrimage before, reported local media.

The pilgrimage is one of five pillars of Islam, which all able-bodied Muslims with the means are required to perform at least once.