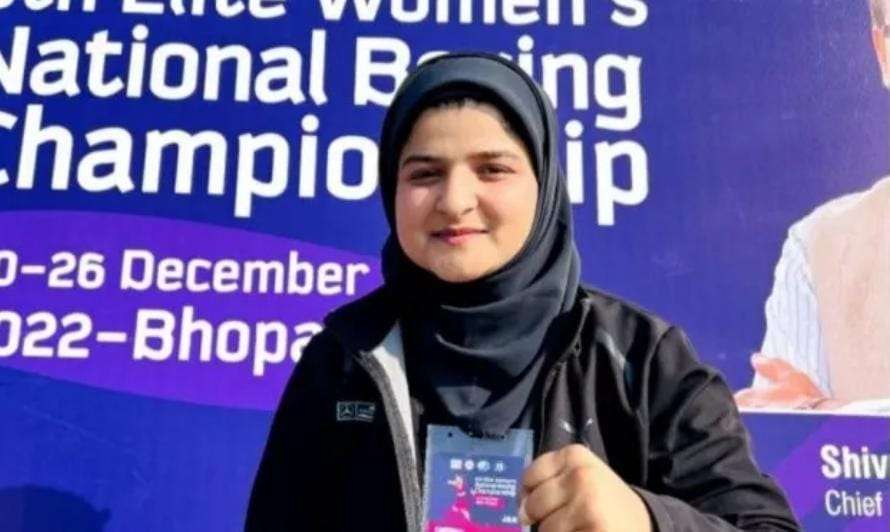 Shariya Manzoor (21), a resident of Nehama village in Kakapora, who is pursuing her Bachelor’s from Government Degree College Pulwama made it to pre quarter finals where she lost to world champion holder boxer.

Boxing is an Olympic game which are very rarely played in Kashmir and reaching to senior nationals in this field is considered to be a big thing.

Quoting the news agency KNO, Shariya Manzoor said that she could have performed better had there been such infrastructure in Kashmir as players have to buy items required for practice in boxing themselves.

Manzoor believes that she can do wonders in this field, if sports department along with sports fraternity will support her.

Though Shariya didn’t won any round in pre-quarters but her bravery and techniques were praised by one and all, while she was also praised for wearing Hijab even during the game, said other players who were part of the group accompanying her.

Becoming first woman to reach pre-quarters in National Championship is not a little thing but i don’t want to stop here as I want to compete in more mega stages and prove my mettle, Shariya said.

Kashmiri woman are very much talented and can do wonders in any field if they will be supported well, she said.

She said that lack of infrastructure is becoming an obstacle for dozens of youth especially girls who are interested in martial arts and other sports but are forced to choose some other field.

“My dream is to reach to the international stage and perform well in mega events but I want support from the government so that I can prove my mettle at mega stages,” she said.