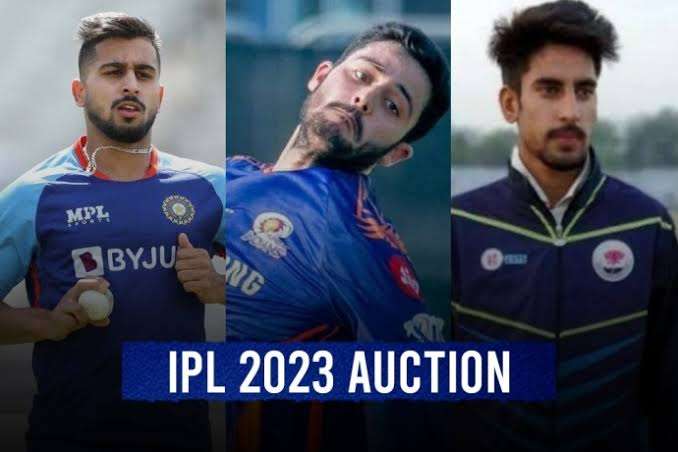 Avinash Singh among five players from Jammu set to feature in IPL 2023,”All players from Kashmir went unsold in auction

Srinagar, Dec 24 (KNO): Five players from Jammu division are set to feature in IPL 2023 but not a single cricketer from Kashmir could get through during the auction.

The players as per news agency—Kashmir News Observer (KNO) which were bought in auction on Friday in Kochi include Vivrant Sharma who was brought by SunRisers Hyderabad on Rs 2.6 crore, Avinash Singh for Rs 60 lakh by Royal Challengers Bangalore (RCB) and Yudvir Singh for base price of Rs 20 lakh by Lucknow Supergiants while Umran Malik and Abdul Samad were retained by SunRisers Hyderabad.

As many as 21 cricketers from Jammu & Kashmir were included in the Indian Premier League 2023 Player Auction but all players from the Kashmir division went unsold in the auction.

The biggest surprise in the pick up is 24-year-old fast bowler Singh Avinash from Jammu. He hasn’t played any level of domestic cricket but it is being said that he is a bowler from Umran Malik’s league.

Avinash’s entry to the IPL is a surprise to every cricket follower in J&K as he is lesser known for everyone but it is being said that he has impressed the RCB franchise with raw pace during trials which were held in Jammu.

Sukhansh, younger brother of Avinash told KNO said that Avinash was fond of cricket since his childhood and was spending most of his time playing the game.

He said that instead of attending school he was spending time playing cricket and joined a local academy for training.

He has recently completed his graduation and is bowling with a speed of over 150 KPH which impressed RCB and we are sure that he will play for India.

His father said that he is very happy that his son has reached this position and “we are hopeful that he is going to prove his mettle as he is very talented”.

Vimla Devi, his mother told KNO that his son’s dream has come true as since childhood he was following his dream to become a cricketer.

“We are very happy over his selection and are hopeful that he will perform well in the upcoming event”, she said.

As per KNO, Yudvir Singh Charak whose ancestors are from Rajouri and now living in Roop Nagar Jammu from last five decades was bought by the Lucknow Supergiants in the players’ auction for a price of INR 20 lakh.

Talking to KNO, Yudvir said that as all players were together as they are currently busy with Ranji trophy and he was a little nervous when his name was taken up during auction, however, he feels happy after getting selected in IPL.

“I have been interested in cricket since my childhood but support from my family wasn’t too good. I continued to play cricket whenever I got time. In 2016, my friend Deepak told me that you are talented and you should go for trials for under 19 selection and fortunately I got selected,” he said.

Read Aslo  BOSE textbooks to be used in all private schools: Director Education

He said since then he has played at various levels including Mushtaq Ali, Ranji trophy and others from Hyderabad side.

“If I get an opportunity in playing 11, I will try to prove my mettle. The aim of my life is to get space on the national side and make the whole nation proud with my performance,” Yudvir said.

Meanwhile, Vivrant Sharma said, “If I get an opportunity in playing 11, I will try to prove my mettle and will try to perform in all 3 departments be it bowling, batting or fielding”.

Since years he has been practicing in M A stadium Jammu along with Samad, Umran Malik and others and this year he played very well wherever he got opportunity and will try to continue that in the coming IPL, he said adding, Yuvraj Singh is his ideal cricketer.

He said that his message to the youth of Jammu and Kashmir will be whatever sport they are choosing, choose it fully and dedicate themselves completely to get their dreams fulfilled.

Before these five, Parvaiz Rasool, Rasikh Salam, Mohammad Mudhasir and Manzoor Pandav were picked up by teams but a few of them didn’t get any matches to play—(KNO)